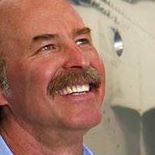 On March 4, 2014, Kermit Weeks, owner of the world’s largest private collection of vintage aircraft, announced that his Fantasy of Flight attraction in central Florida will be closing its doors to the public on April 4, 2014. In his video message he explained that his business model was no longer economically viable in its present form and his operations were in urgent need of restructuring. Although we regret the fact that this outstanding collection will no longer be open to the public, we wish Kermit Weeks all the best in finding a new way to display his airworthy museum pieces to a wider audience. He has yet to reveal the plans he has in this direction, but we are hoping for a further announcement soon.